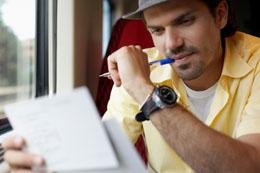 Thank You Letter after Phone Interview

Following up with a thank you letter, after a telephonic interview, may boost the prospects of a person desirous of seeking employment. Details with regard to drafting a thank you note are mentioned herein. A sample letter is provided to establish reference.

A telephonic interview is an important step in any hiring process, since it gives the interviewer an opportunity to assess the candidate and determine the feasibility of pursuing further communication. Although one has a chance of expressing interest in the proposed job during the telephonic interview, it would not hurt to restate one’s interest and project oneself as the ideal candidate.

The twin objectives of highlighting one’s achievements and presenting oneself as the ideal candidate, can be coupled with a few words of appreciation that are due to the accommodating interviewer, who manages to take time from his/her busy schedule to evaluate a potential candidate. Courtesy demands that one should follow up with a thank you letter after phone interview.

What’s in a Letter?

A thank you note, sure, signs in a potential difference between two candidates, who range close with regard to their potential of being hired for the job. A thank you note pencils your interest in the job offer. Candidates, sometimes, have a delusional view about sending across this form of letter. They feel that by sending a note of thanks, they would seem an easy catch — the employers, certainly, must drive a hard bargain to value the employee, mustn’t they? This, however, is not the case. To an employer, who is considering you for the position, a thank you letter matters. It shows that you care — one, for the position; two, for the etiquette.

Another destitute notion is with regard to those, who believe thank you letters can flip fate; that they can be selected on the basis of the letter. Well, if you are not tailored for the job, no laundry lists of acknowledgments are supposed to work in your favor. It would be unfair and ludicrous to a highbrow candidate, if he is not selected for the position, just because he was unable to post a thank you letter. Consider the thank you letter as an attachment to boosting your opportunity to obtain the job. It is not a decision maker, but only a decision backer.

Send the post-interview note after a few days have lapsed. Timing matters here. The follow-up letter should display that you have reflected on the propositions discussed. This shows you have pensively thought about the prospects, and the enthusiasm to obtain the post has sustained beyond the employer’s cabin.

A good follow-up letter should be drafted to thank the interviewer, wherein one identifies oneself, citing the date on which one was interviewed. The letter should make a compelling reason for the interviewer to pursue the matter further. Restating one’s qualifications, mentioning skills that one may have inadvertently left out during the telephonic interview, and reiterating one’s interest in the job may help further one’s cause. The following sample may help you draft a thank you letter after the job interview.

A good follow-up letter should be succinct and informative. An elaborate letter is best avoided since one cannot expect the interviewer to navigate through tons of information hoping to stumble upon the relevant details. Clinching the job, of course, is subject to the skills and qualifications of the person; however, as stated earlier, it would help to take proactive measures by following up with a sincere thank you note. It’s hoped that the above letter writing tips may help one draft an impressive letter, although, one strictly need not adhere to the prescribed format.