Quirky Ways on How to Deal With Male Chauvinism at Work 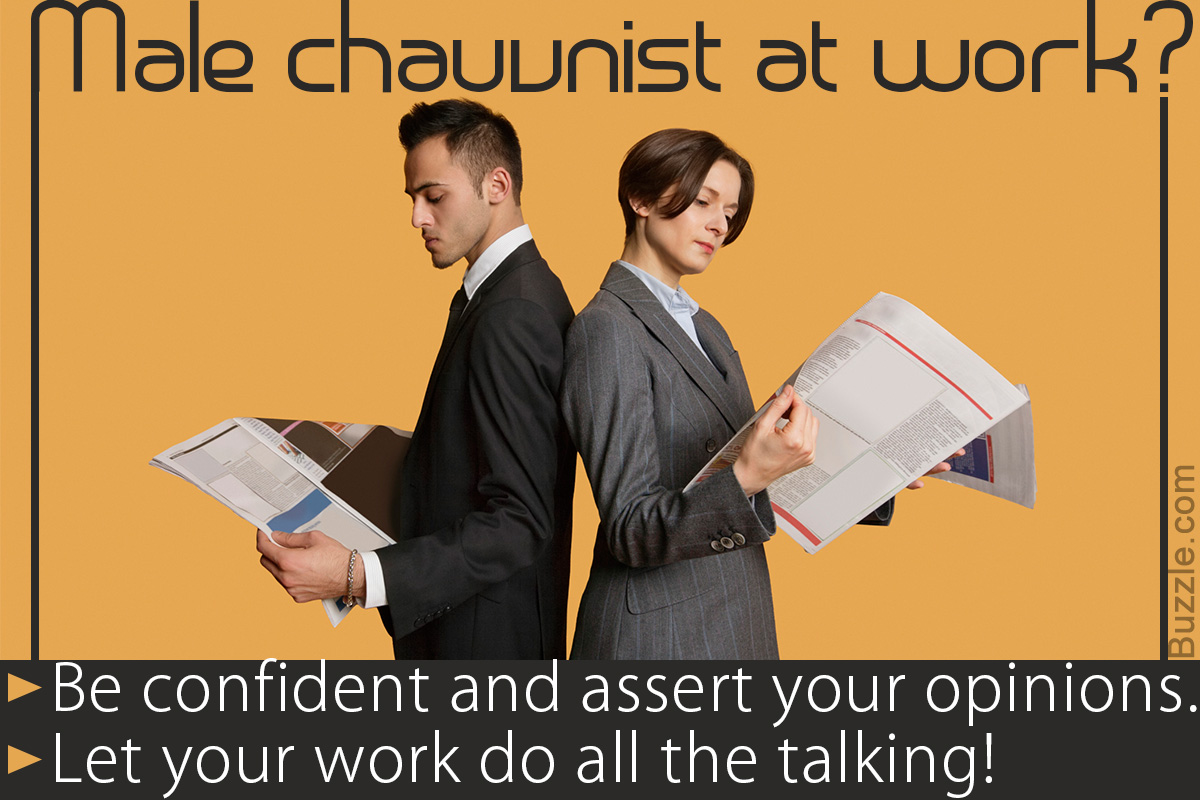 Male chauvinism has been rampant since olden times, and still has not been completely erased out of the world. Even as women have broken the shackles and stepped into offices to hold high positions, there continues to exist some chauvinists who still harbor the big male ego and superiority complex in their minds.

This is an urban slang used to define any man who thinks women to be inferior and only worth as showpieces or for menial labor work that does not require any thinking.

The male chauvinism definition is an attitude that believes in superiority of men over women.

At the workplace, male chauvinists believe that women are better at handling lesser important tasks, and cannot deal with new ideas, decisions, and managerial level tasks. You’ll find them everywhere. Sadly, even in today’s times, we cannot say that women have got their much desired independence and honor of work. Your professional life can get hampered if you have some of them at work. This attitude at the workplace has stemmed from social and psychological problems of male dominance. Even in the most developed countries, you’ll find that women have not escaped this unfair treatment. Be it any corner of the world, a woman’s primary responsibility is considered to be the house, and mostly, she ends up coming out of the house only due to economic reasons. On the other hand, a man is expected to be the provider and the protector. So, typically, men have found their places in authoritative and decision-making processes.

How to Identify a Male Chauvinist

He might not always make derogatory remarks to indicate that he believes that men are superior. He might be hostile towards you, not be receptive to your ideas, will not discuss important projects with you, or turn a deaf ear whenever you’re talking or giving a presentation.

He might not publicly profess his attitude of superiority, but when it comes to identifying such men, you’ve to look out for peculiar traits.

Chauvinists are extremely fanatic about the perception that men are meant to be breadwinners. They will usually want their female colleagues to work at subordinate levels, and hate taking orders or suggestions from any female boss.

They will make remarks about women being unprofessional at work.

In worst case scenarios, they may even resort to sexual harassment. 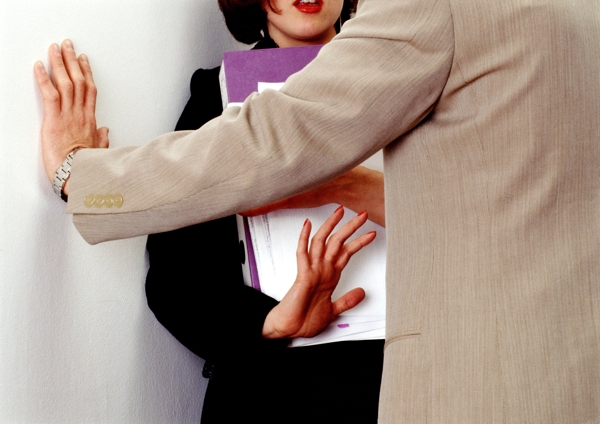 Dealing With Chauvinism at the Workplace

Sometimes, it is better to ignore such people, rather than wasting the sweat of your brow trying to mold their minds. Once they know that you’re ignoring their remarks and actions, it will serve no purpose to them, and they might stop making such comments or moves. However, remember how much crap to take, and if that person makes any kind of offensive comment, contact your HRD immediately. Do not ignore or stay quiet in such circumstances.

On the other hand, even women are to be blamed, equally. As women, we wish to please everybody, and when we can’t do it, we tend to feel guilty. It is equally true that we have to deal with certain natural bodily differences. Accept them, and do not let that become a hindrance in your work. Believe that even as a woman, you can become equally competent, and do not let health matters and emotional baggage put your work down. Male chauvinists are hunting for such occasions, where they can bring you down proving that they’re better. As age progresses, every woman goes through bodily changes, and some unpleasant health conditions might hamper your career growth. Be vigilant, and do not let your confidence be bogged down by anything.

Let your work speak for you

You know that empty vessels make more sound. It is pointless wasting your time and brooding about such men who have their own world built around them. Instead of trying to change them, be firm in your approach. Once you’re strong and firm, no one will try to take you for granted. Search for opportunities to exhibit your talents. If your boss wants you to assume any new responsibility, do not shy away. Take this golden opportunity with both hands. Everyone wants to do business in the end and make good profits. Once the management realizes you’re a performing candidate, they’ll certainly reward you with raises and promotions. So, go on, and let your achievements serve as a huge slap on his face. 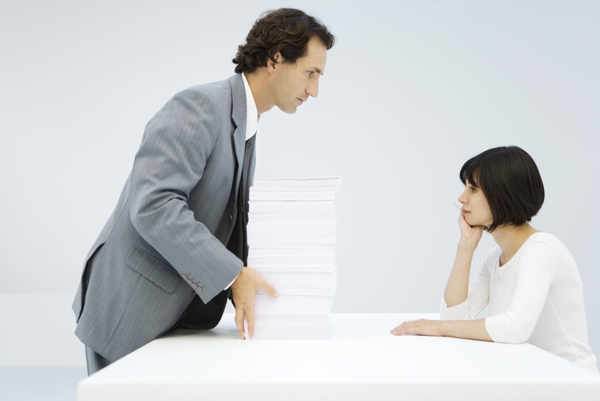 Have a male chauvinist boss?

Having a male chauvinist boss can be equal to having your worst dream come true. He might repulse your ideas, hamper your growth, or be biased towards your male colleagues. He might consider delegating important tasks to them, over you. You should know the limit, and once that gets crossed, you should not muffle your voice. If he is going to the extent of demeaning you or harassing you in any way, it is better to complain to higher authorities or to the human resources department. Rules at the workplace for protection of women have become very strict these days, and immediately seek legal action if he goes overboard.

Be powerful and in-charge of your emotions

Learn to keep your home and workplace different. Men have been taught since childhood to be the protectors, not to cry, and be a financial provider. He might become jealous or insecure of your position or achievements in the office, and hence, will always be on the lookout of some incident to bring you down. Be in charge of your emotions, and do not weep in case of any untoward happening in your office. The more you display your emotions, the more you give them an opportunity to prove that you’re the weaker sex.

Further, take help from other disgruntled female employees who have been a victim of that person’s male chauvinism. Team effort always works better. Most of all, remember that you’re not alone, and there are many women like you sailing in the same boat. Sadly, we all have encountered or have been victims of such kind of behavior. This is a struggle of every woman who is trying to make her place in the professional world. Gender defined stereotype roles are still rampant, even in the developed nations. Talk to people. However, do not prejudice your minds about all men on the basis of a few rotten apples. Seek help from your supportive male colleagues.

Of course, do not let that suppress your growth. If there is no one in the management paying heed to your grievances, lady, it is time to bid goodbye to that organization. Start searching for better opportunities. Quitting is not a recommended option, until and unless you come to a point where you cannot survive anymore in that organization. 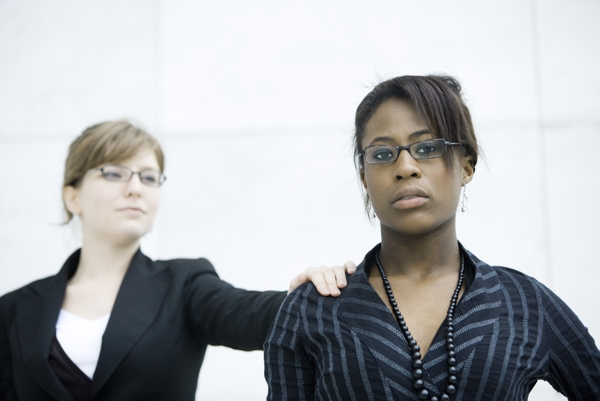 Feminism is the revolutionary thinking to create awareness and fight for the ‘equal’ rights of women. The main motive of feminism is to improve the state of women, and fight the issues of domestic violence, female foeticide, denial of rights to women, harassment at the workplace, lack of education and health awareness, etc.

However, we cannot say that there is no female chauvinism completely. Feminism has been given a negative shade by some females who misused the protection rights given to women. While fighting for equality, there are some women who end up behaving just like the male chauvinists. Chauvinism should be completely distinguished from feminism. The intention of the feminist movement is to give women their rightful status.

Understand the fact that not all men are the same, and hence, it is necessary not to generalize and have a negative or hateful mindset towards all the men around you. Men and women both, have to live harmoniously as part of the human race. They’re both dependent on each other. The situation is highly complex, but we need to constantly remind ourselves that men and women are not at war here. Once dignity to all kinds of work is established, and women are given their rightful place, probably, chauvinism will not see the light of day.